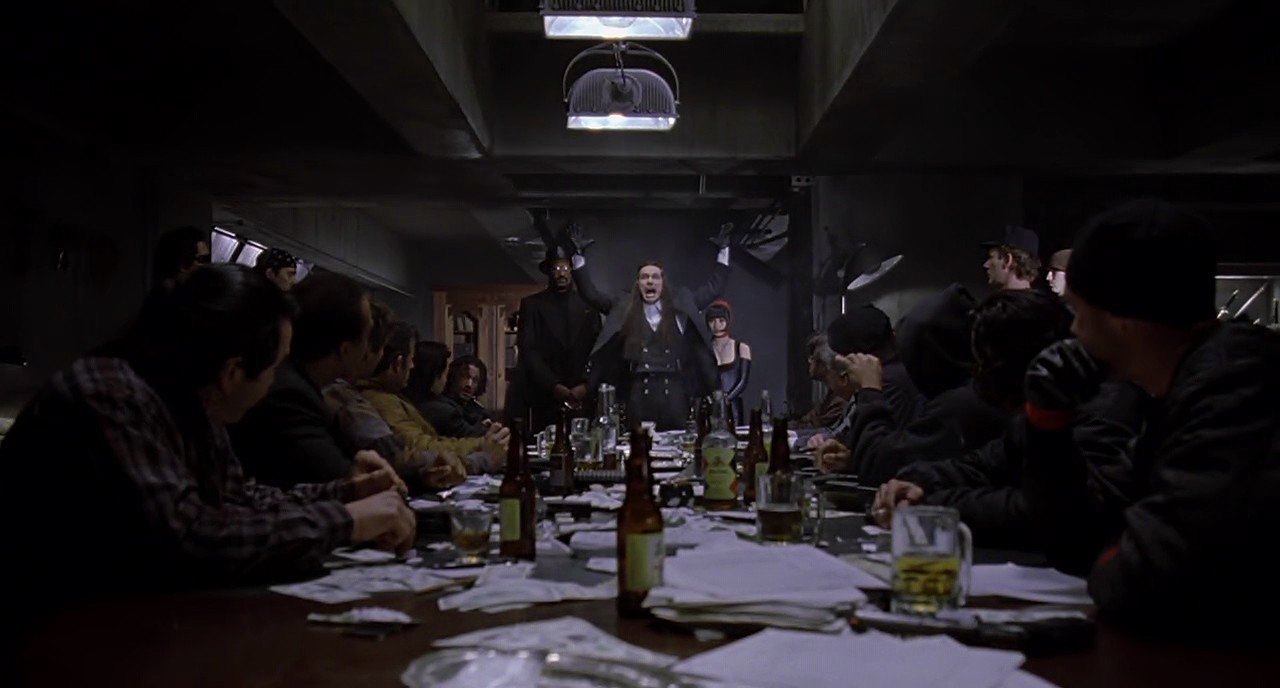 The first time Brandon Lee appears on screen in “The Crow,” he is climbing out of his grave. (The scene is the first in which his face can be recognized; an earlier scene shows his character’s body lying on the street in the shadowy distance.) Lee’s ghoulish entrance is the eeriest possible sight, of course, because he was killed by a misloaded prop gun while making this movie just over a year ago. Now he howls as he stands in the mud and rain in the middle of the night playing Eric Draven, a small-time rock musician who has risen from the dead to get justice a year after he and his fiancee were murdered.

The advance publicity lavished on “The Crow” comes almost entirely from its newsy, tragic sidelight. Based on a comic-book character created by James O’Barr in the early 1980’s, this is definitely a genre film. It is a dark, lurid revenge fantasy and not the breakthrough, star-making movie some people have claimed. But it is a genre film of a high order, stylish and smooth. Its dark look of midnight terror and its skewed cityscape link it to the “Batman” movies, but “The Crow” makes even the bleak “Batman II” seem like a kiddie’s playground.

The crow that accompanies Draven on his brief return to earth is his link between the worlds of the living and the dead. In flashback scenes, fragmented and full of jumpy camera movements, we see that Draven’s fiancee was raped and murdered in their apartment and that he was sent flying out the window by a seamy band of drug dealers who resented the couple’s attempts to clean up the neighborhood.

On his return from the dead, Draven puts white makeup on his face and paints black lines to exaggerate his eyes and mouth. This lithe and gaunt figure is clearly a comic-book avenger with supernatural powers. When he is shot, his wounds heal magically. Ernie Hudson, as a policeman who saw Draven’s corpse, looks quizzical when he notices him walking the streets, but quickly accepts the fact that a man has returned from the dead; it’s just the kind of thing that happens in fantasy land.

Like most action-genre movies, “The Crow” spends much of its time showing the brutality with which Draven goes after his murderers. There are several major shootouts, a couple of explosions and one death in which Draven’s victim ends up with a dozen or so hypodermic needles sticking out of his body. As the gang leader, called Top Dollar, Michael Wincott has a genuinely evil rasp in his voice. Top Dollar seems to be sleeping with his half-sister, a sorceress, but none of the characters are individualized much.

“The Crow” is more mainstream than it might have been, because script changes were made to soften the story after Lee’s death. Sarah, a young girl befriended by Draven and his fiancee, now offers a voice-over at the film’s beginning and end about preserving the memory of those you have loved. Draven saves Sarah from her drug-addled mother. Rochelle Davis makes Sarah a sympathetic, streetwise girl, but her enhanced role merely adds a trendy death-culture gloss. It doesn’t change the film’s violent nature or eye-for-an-eye message.

Brandon Lee had only three days of filming left when he was killed, and the performance is essentially his. There are some scenes in shadow that use a double, and some computer-enhanced scenes that seamlessly lift his image from one setting and place it in another. None of this becomes distracting.

Lee had great presence, but who knows if this movie would have led to more mainstream parts for him? The truth is that the role of Draven didn’t require a huge amount of acting.

The film does offer promise for the future of its director, Alex Proyas, a 33-year-old Australian who is a veteran of music videos and commercials. Mr. Proyas’s flair suggests he might make the leap to mainstream success. Sleek and accidentally haunting though it is, “The Crow” belongs in its niche.