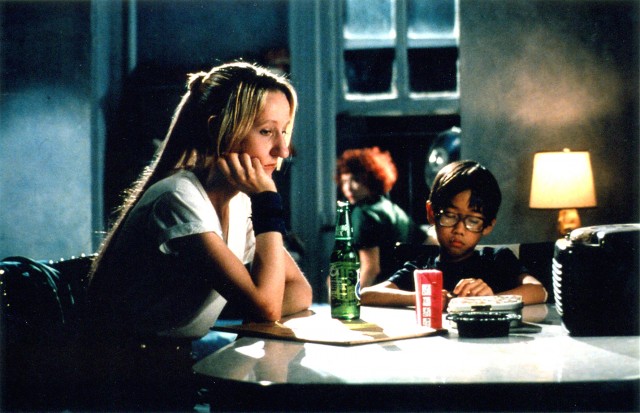 LEAD: WHEN Chinese fairy tales impinge on the life of Nicole, a young woman in downtown New York, several things happen: her sexy French roommate becomes bald; her finger begins to bleed; an Oriental woman about to unravel these mysteries is killed. Nicole’s half-Chinese son, a wise child, thinks the whole thing smells like almonds.

WHEN Chinese fairy tales impinge on the life of Nicole, a young woman in downtown New York, several things happen: her sexy French roommate becomes bald; her finger begins to bleed; an Oriental woman about to unravel these mysteries is killed. Nicole’s half-Chinese son, a wise child, thinks the whole thing smells like almonds. Sara Driver’s lyrical, witty ”Sleepwalk” has the illogical sense of a dream, backed by the texture of everyday life. In her first feature, Ms. Driver blithely absorbs influences – from chiaroscuro to Surrealism to performance art – and spins them into her own vibrant, original style.

”Sleepwalk” begins with the theft of an ancient manuscript, which the sinister Dr. Gou asks Nicole to translate. She does, and soon life imitates these tales. Isabelle, the bald, vain roommate, is punished for her greediness, like the princess in the manuscript story who refused to give a bird a lock of her hair. Another tale warns, ”Keep the child away from the man who smells like almonds.” The child is clearly Nicole’s son. But why does Dr. Gou lie on a bed of almonds, and why does Ecco Ecco, the Oriental woman, say ”almonds, poison,” as she points to the manuscript?

Ms. Driver, who co-wrote the screenplay, takes the incoherence of these events for granted. Despite its trappings of mystery and suspense, ”Sleepwalk” is barely concerned with plot; what matters is the feel of this place where dreams meet reality. In a glance Ms. Driver captures the print shop where Nicole works, a grimy warehouse building where she and her hip-looking colleagues bend over computer terminals and drafting tables, intensely bored. On her way to a neighborhood bodega, Nicole sees a child throw a handful of stardust into the air; at least that’s what it looks like.

Sara Driver, a graduate of the New York University Film School, has worked on Jim Jarmusch’s three films. She produced his ”Stranger Than Paradise,” and he and Frank Prinzi did the dazzling camerawork on ”Sleepwalk.” Ms. Driver’s film, though, is like a Jarmusch work turned upside-down and inside-out. Instead of his black-and-white photographic images, she works with light and shadow like a painter creating still lifes. Doors open and light slashes diagonally across darkened rooms; whole scenes seem painted from a palette of blues. And while Mr. Jarmusch’s characters are downtrodden dreamers, Ms. Driver’s are offbeat people who have dreams foisted on them.

Although ”Sleepwalk” moves slowly, Ms. Driver keeps her images from becoming static or self-consciously artsy. The performance artist Ann Magnuson is colorful comic relief as Isabelle; she may lose her rich red hair and parade around much of the film looking like Daddy Warbucks, but she never drops her perfectly exaggerated French accent. Suzanne Fletcher’s Nicole is methodical and laconic, a relatively ordinary center for her jumbled household, a perfect foil for the magic that appears before her.

”Sleepwalk” will be shown as part of the New Directors/New Films series at the Museum of Modern Art today at 8:30 P.M. and tomorrow at 1 P.M. It will be preceded by ”Drum/ Sing,” a 1985 short from New Zealand featuring a performance by a group called From Scratch – a trio of percussionists who use drums and chimes, their hands, and occasionally their voices. This appeals to a rather specialized taste. ”Drum/Sing” is an unimaginative 22 minutes, worth sitting through only to discover the freshness of ”Sleepwalk.” Checkered Chinese SLEEPWALK, directed by Sara Driver; screenplay by Ms. Driver and Lorenzo Mans, from a story by Ms. Driver and Kathleen Brennon; photography by Frank Prinzi and Jim Jarmusch; edited by Li Shin Yu; music by Phil Kline; production company, Ottoskop Filmproduktion GmBH, Munich, West Germany, and Driver Films Inc., New York; production team, Dave Bromberg, Dan Shulman, J. C. Hardin and Jane Weinstock. At Roy and Niuta Titus Theater 1, the Museum of Modern Art, 11 West 53d Street, as part of the 1987 New Directors/New Films series.